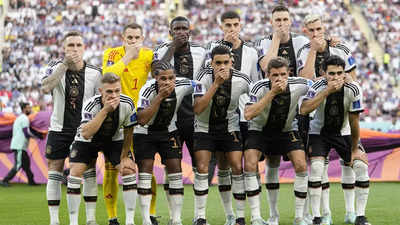 Following Iran’s reluctance to sing the national anthem prior of their World Cup match against England, Germany players have expressed their protest against the “OneLove” armband by putting their hands over their lips during a team picture ahead of their game against Japan.

All of Germany’s players made the gesture in front of hundreds of cameras on the field before the start of a World Cup Group E encounter on Wednesday at the Khalifa International Stadium in Qatar.

While inside the stadium, German Interior Minister Nancy Faeser sported a ‘One Love’ armband and sat near to FIFA President Gianni Infantino.

FIFA has threatened to penalise seven European teams if they donned the armband symbolising diversity and tolerance.

In Qatar, homosexuality is banned.

Previously, Faeser had chastised FIFA, claiming that the threat of punishment was a mistake and unacceptable behaviour.

“How federations are being placed under pressure is not acceptable,” Faeser remarked before the game during a visit to a German FA event in Doha.

“It is unfathomable in today’s world that FIFA would not want individuals to freely advocate for tolerance and against prejudice. It does not match current times and is not respectful to individuals.”

The German Football Association (DFB) issued the following statement: “We wanted to use our captain’s armband to advocate for ideals that we share as members of the Germany national team: diversity and mutual respect. We wanted our voice to be heard, so we banded together with other countries.

“It was not about making a political statement; human rights are unalienable. That should be taken for granted, but it isn’t. That is why we value this message so much. Denying us the armband is equivalent to denying us our voice. We maintain our stance.”

Previous articleAmazonian Cubensis Mushrooms: All You Want to Know !!!
Next articleSPAIN TAKES A 3-0 LEAD OVER COSTA RICA IN THE WORLD CUP 2022.