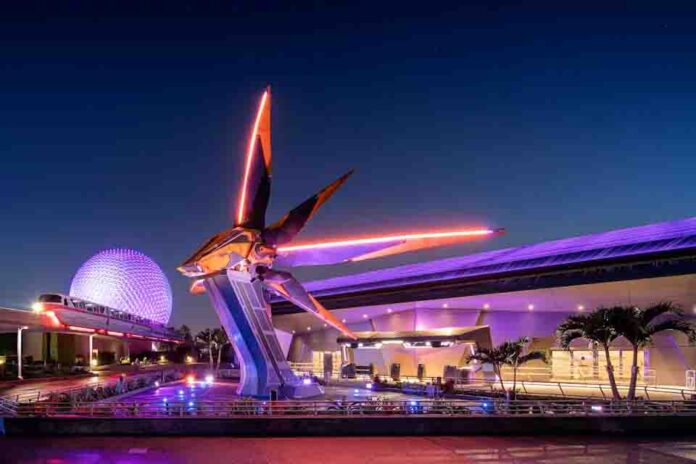 There’s a new attraction open at Epcot and it’s bringing guests along for the ride as Marvel’s Guardians of the Galaxy take off on a chase through space.

But Guardians of the Galaxy: Cosmic Rewind comes with more than just an incredible ’80s soundtrack and a unique ride experience every single time: Epcot, known for its celebration of global community and vision for a better future has opened its first “otherworldly pavilion” to house the attraction — one that will take guests through the history and customs of not another country, as we have seen in the park’s World Showcase, but another planet entirely.

The new Wonders of Xandar pavilion has a name reminiscent of the defunct Wonders of Life pavilion, which existed in the park between 1989 and 2007. In naming the pavilion, Disney Parks hopes to engage with new Marvel fans while keeping Epcot purists like myself happy with the homage to past storytelling.

But just what is the new roller coaster and the pavilion it lives in? Like any Disney Parks project, there’s a good backstory.

Inspired by a memory, as the story goes, Guardians of the Galaxy leader, Star-Lord, also known by his human name, Peter Quill, took a trip to Epcot in the ’80s when he was a young boy living on Earth. Now, he and his band of unlikely superhero pals have teamed up with the planet Xandar’s space militia so Quill can share with his fellow Earthlings a truly intergalactic experience.

While Xandar is 2.5 million light years away, guests are told our two planets were born at the same moment: the Big Bang. At Epcot, advanced technology shared by Quill’s alien allies allows Earthlings to travel through the cosmos to explore our galaxy for the first time — but that’s not the only first found inside this new pavilion.

“It’s the first reverse-launch coaster, it’s the first omnicoaster (a coaster that can go forward and backward) of our park and it’s also the first time we’re going to see Guardians in any of our [Walt Disney World] attractions,” Meghan Short, a senior media producer for Walt Disney Imagineering, tells Yahoo Entertainment. “Of course, something is going to go a little bit awry … and that’s where the ride experience starts. You’re going to hurtle through space and go back in time all the way back before Pangea — and hopefully make it back down to Earth as we know it.”

As someone who was able to experience the new coaster multiple times, I can say Guardians of the Galaxy: Cosmic Rewind is pure fun. Imagine that feeling of blasting your favorite ’80s song in the car, windows down on a perfect sunny day — except here, you’re soaring through the galaxy, flying through the Milky Way.

There’s a kind of anticipation with each ride as you wait for that moment when you take off backward and one of six classic rock and roll songs begins to blare. As your journey through the stars continues, it’s hard to stop yourself from singing, cheering and dancing.

In addition to a different audio track each time — from Tears for Fears hit “Everybody Wants to Rule the World” to Blondie’s “One Way or Another” — as the ride vehicles rotate individually, each ride experience is unique. It all depends on your seat and the movement of that specific ride.

Zach Riddley, the Walt Disney Imagineering (WDI) creative portfolio executive who is overseeing the multi-year transformation of Epcot, says the ride is different from anything WDI has created to date.

“It’s also the first-ever roller coaster-style attraction at Epcot,” he says. “The first time I rode the attraction I got off and literally couldn’t find the words to describe what I just felt.”

Ridley says WDI designed the ride and its powerful g-forces to “offer an aspirational level of thrill.”

“The Guardians of the Galaxy are a ragtag crew but they found each other across the cosmos and now we get to share in their adventures,” he adds. “That’s special.”

So what’s Ridley’s favorite seat on the attraction?

“My personal favorite is the front row, right-side seat,” he says. “You get some unique sensations in that seat, but honestly there isn’t a bad seat in the entire ride vehicle.”

But, for Ridley, another favorite spot in the Wonders of Xandar pavilion is the end of the ride, where Disney employees help guests unload after their cosmic adventure.

“I have enjoyed seeing folks ride this for the first time and seeing their reactions in the unload station,” Ridley says. “That’s why we do all this work at Imagineering, to create experiences that inspire.”

Because it’s a theme park after all, there’s also a gift shop that sells out-of-this-world merchandise. Multiple collections offer the opportunity for every fan, from Marvel-lovers to Epcot enthusiasts, to all find mementos to bring back to Earth after their journey.

“One of my favorite [collections in the shop] is the Heroes of Xandar,” says Elisa Melchiori, a brand merchandising manager at Walt Disney World. “We know in the first film that the Guardians did help save Xandar, so in their eyes they are the rockstars — rockstars of the galaxy.”

“We definitely went after that concept with the rockstar concert tees,” Melchiori adds, “really highlighting how cool the Guardians are.”

So how does Epcot’s latest addition measure up to someone who’s been visiting the theme park since the ’90s and now stops by at least once a week? I say it works.

As many of the most beloved attractions and experiences at Epcot were there when the park opened in 1982, this park always seems to be stuck somewhere between embracing its history and moving forward into the future. As it’s grown and changed, Epcot has always stood for showcasing the cultures of the world, and seeing that world get a little bit bigger is a concept that I think truly rocks.